David Hull and David Hull Tree Farms Woods Superintendent, Wally Kundert load a Clark 667 wheel skidder on to a General Lowboy. This skidder is being loaded at the 200 acre Ferguson Tree Farm in Lane County, AKA The Kneble Place. The skidder was being hauled to Muddy Creek Charter School in Inavale, Oregon for a tree removal project. The the truck is a 1997 Kenworth T-800 with an N14 525 Cummins engine, Eaton 18 speed with single speed Rockwell rear ends. This truck is nearing 19 years old and has 219,000 original miles on it. Driver Wally Kundert ordered this truck brand new in March, 1997 from salesman Danny Bivens of Roberts Motor Company in Eugene, Oregon. On This day the truck was pulling David Hull's 1960 General 40 ton, wide goose neck bunk mount lowboy. General built this trailer brand new for David's father, Homer Hull in February, 1960 to pull behind his recently purchased 1958 Kenworth logging truck. The trailer hooks to the log bunk on the truck and does not require a fifth wheel. The tree farm uses the lowboy only in the summer only on a short term basis every year. In 1973, Homer purchased a new Clark wheel skidder. Loading it over the side just one time was not practical. He instructed his son David to load the skidder on the lowboy and take it to General Trailer in Springfield, Oregon. He told them "when they feel it is simple and safe call me." The results were the pin on skid rails and the two fold up ramps. The ramps were built using two logging trailer reaches welded together (at the end of this video one can hear David recounting this story to Wally). The trailer is nearly 60 years old and still is used on a limited basis and is still in very good working order. In 2006 David's son, Casey designed a "false" bunk that still pins on but has a fifth wheel king pin on the bottom side of it. This accomplished two things: One, without any changes the lowboy can still be pulled bunk mount style behind David's blue 1958 Kenworth, as it was originally intended for. Second, with the false bunk pined on to it, the lowboy can be pulled with any of the Tree Farm's fifth wheel trucks. The Clark skidder in this video was purchased brand new in 1980 By Homer Hull. It was Clark's center piece of the 1980 Logging Show at the Lane County fairgrounds in Eugene, Oregon. The machine features a 453T Detroit engine, ESCO swing grapple, with winch. In 1989 the skidder was totally gone through, rebuilt & refurbished. In 2005 the tree farm purchased a D4 Caterpillar hydrive with swing grapple. Thus, the skidder was semi retired and the cat is now our primary log skidder. The old Clark is used on a limited basis mostly in the summers. This video was shot using a GO PRO Hero 4 Silver Edition and this video was created with the YouTube Video Editor (https://www.youtube.com/editor) All The Best, Cody :-) 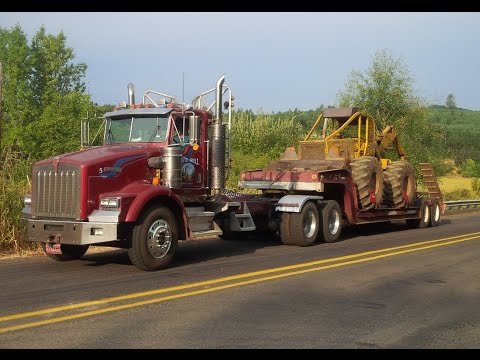 Ingenious Construction Workers That Are At Another Level ▶7

Ingenious Construction Workers That Are At Another Level